As a real-time ray tracing rendering software based on the updated rendering algorithm and computer technology, D5 Render performs better and better along with the development of both hardware and software.
GPU (graphics card) is always the topic that D5 users care most about, because it determines the performance of D5 Render and other computer graphics software. Besides, the video driver also plays an important role as the bridge between GPU and the Windows system.
In this blog, we will explain what a video driver is, how it affects performance, and how to configure the appropriate video driver for D5 Render with different graphic cards including AMD, Intel, and Nvidia.
What is a video driver?
A driver is a program that enables communication between an operating system (OS) and a hardware component or software application (from Webopedia). Every computer uses multiple drivers to control various hardware components and applications, like CPU, monitor, and even USB drive. 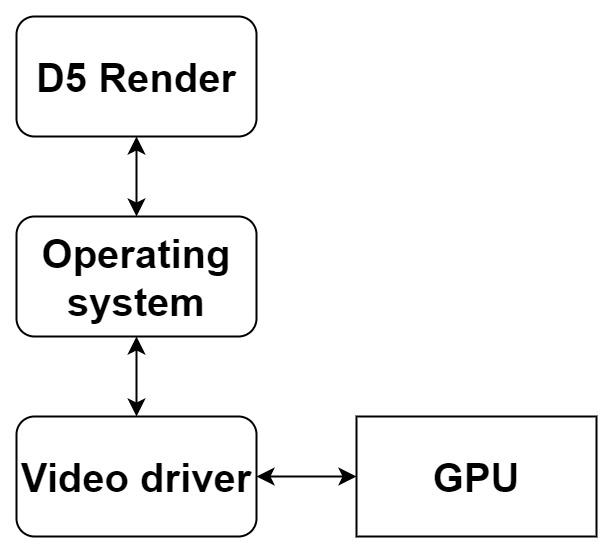 You can find installed hardware components in Windows Device Manager, and check detailed information about the driver. 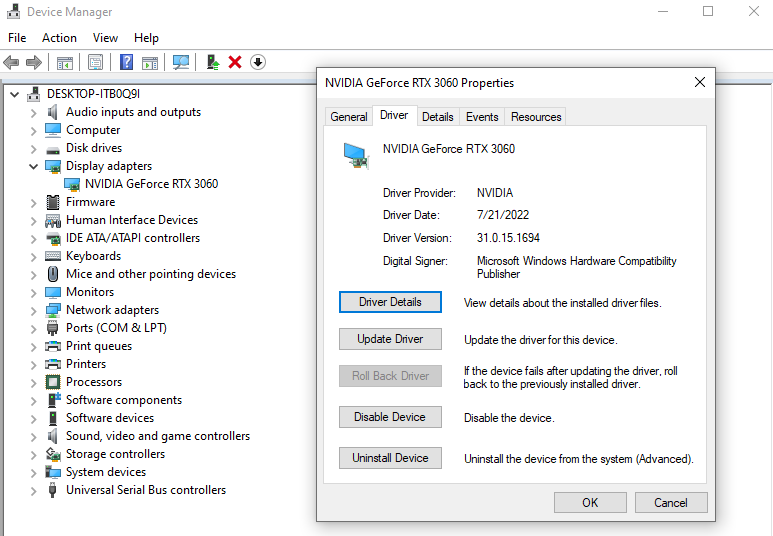 Windows 10/11 system has a built-in driver for basic usage, making sure the hardware connected can work. At the same time, hardware or application developers may produce their own driver to make the most of the device. For example, when you connect a new keyboard with the computer, it will start to work instantly since the Windows system has its own driver to recognize the keyboard, enabling you to type without connection problems. But if you want to adjust the RGB light or set hotkeys for the keyboard, you have to download the corresponding driver from the keyboard's official website.
‍
The video driver helps a lot improve application performance, API interoperability (e.g. OpenCL/Vulkan), and application power management. Therefore, the first thing you should know is how to install the correct video driver according to your need.
Download and Install
Method 1: Assistant application from video card manufacturers

‍This is the safest and easiest way to configure your driver and GPU settings.

NVIDIA: Geforce experience (except Quadro RTX series, which will be mentioned below)
AMD: Auto-Detect and Install tool
Intel: Driver & Support Assistant
‍
With them, you can keep the video driver auto-updated, and also configure GPU settings in a more convenient way.

Method 2: Download video drivers from the official website
‍
‍NVIDIA            AMD            Intel
‍
Before choosing the right driver, you need to identify the version and type of the graphics card. Please note that it is not recommended to download drivers from 3rd-party sources, especially some unauthenticated or untrusted ones, since the installation file can be incomplete or contain special settings that may influence the system or software performance.

Game ready or Studio? What about AMD and Intel drivers?
This is a hot topic among NVIDIA users, from gamers to artists.
‍
From the FAQ of NVIDIA, we can see this:
Yes, the main bodies of the driver application have no big differences, while the biggest difference is the update frequency and iteration speed. Game ready drivers update more frequently, with new improvements and fixes, but it can also be possible for bugs to appear.

Studio drivers are better tested and less frequently released, thus providing better stability, but it takes more time to have new updates of fixes and improvements for known issues.

For example, NVIDIA once released a new Game ready driver which fixed an issue related to D5 Render, and the fix did not come out for studio drivers until 3 weeks later.

Considering that D5 Render's update frequency is usually higher than traditional CAD or rendering software, more users choose Game Ready driver for NVIDIA graphics cards. But Studio driver can work with D5 Render with no problem, so users who prefer stability would probably choose that.
Finally, for AMD and Intel users, there are similar options too. You can choose Adrenalin or Pro Edition for AMD GPU, and choose BETA or normal version for Intel Arc series.
‍
Do not worry about getting confused, D5 team would recommend relatively stable and powerful video drivers for each release of new versions. For D5 Render 2.3.2, you can find that information in System Requirements for D5 Render.

‍And both the two versions of video drivers can have a good performance in D5 Render. For detailed information, please check the test results of our benchmark tool.