How to add realistic fog to archviz rendering with D5 Render

Fog effect | CGI | D5 Render | Tyndall Effect | Archviz
With fog, you get to bring atmosphere and a sense of space/depth to your 3d visualization. For decades we've seen people add realistic volumetric fog effect to their works via Photoshop or After Effect, but for archviz, you don't necessarily need to go to another program after rendering. D5 enables you to generate fog with one click and see it flow in the sky as you like. In this blog, learn about how to use Fog in D5 to take your renders to another level. 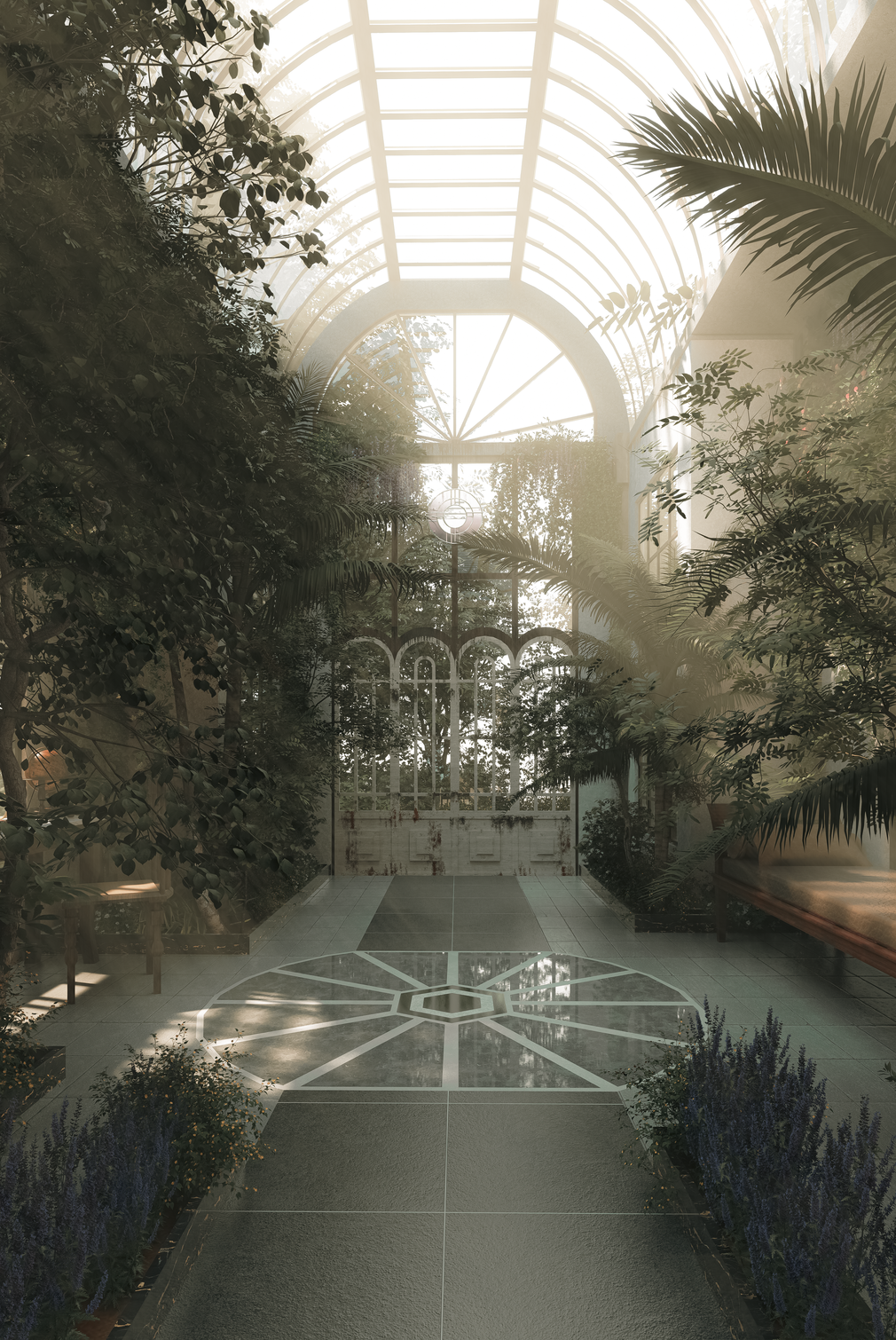 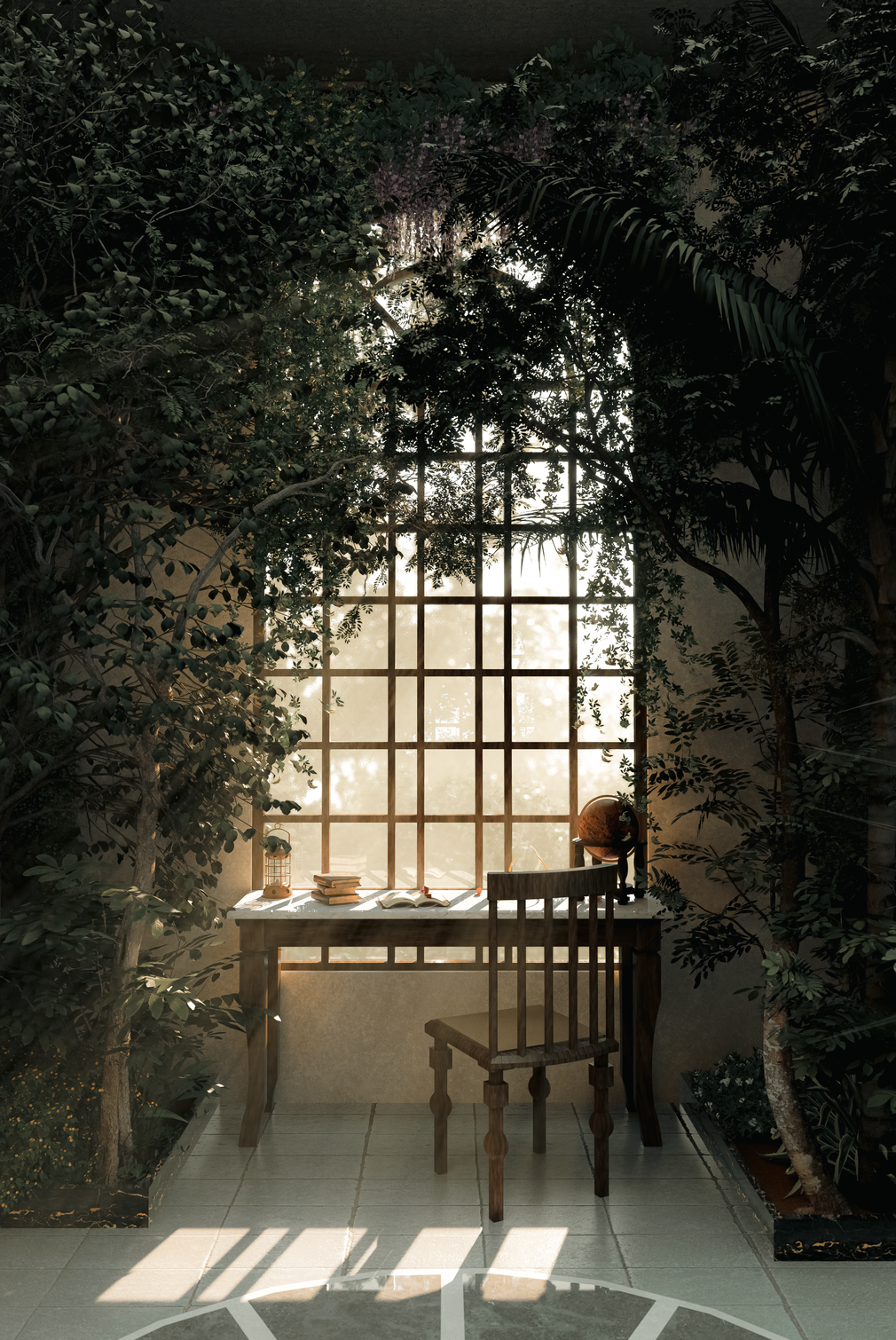 Greenhouse by TIENHO
Thick and heavy fog can sometimes add a solemn and mysterious vibe to the whole scene. It's especially helpful when you want to make a specific building or high-rise stand out in the rendered image. LINK
Fog also plays a huge role in archviz rendering set in a natural surrounding. In this case, a thin, or even subtle layer of fog can add the right amount of depth and contrast to your scene. It can be hard to recognize at first sight in some amazing visuals, but we all know the fog has done its part in creating a fascinating atmosphere in there.

Zero Island by JJJ
Some may assume that fog is made for cloudy, rainy scene, but that's not the case. Used wisely, it also helps in a bright, sunny scene. Light Bulb House by LIYOUFU (Free Download on D5 Forum)
There are so many great works of art where fog effect works well with other weather effects: smoke,cloud, rain and more. Discover more of it yourself with the advanced Weather System (cloud, fog, wind, rain, and snow) in D5 Render. How to Create Realistic Fog in D5

Adjust the color and intensity of fog

Bear in mind that fog is not purely white or gray. Its color is influenced by surrounding elements like sky and trees. So don't forget to set an appropriate color for the fog so that it fits into the environment.
For example, in this scene, you can see that the fog has a tint of light blue. If white, the image would look a little pale and rigid. After setting the color, you can adjust its intensity. Normally 0.6 would be fine. If you want to simulate a noticeable foggy weather, you can pull the slider to the right 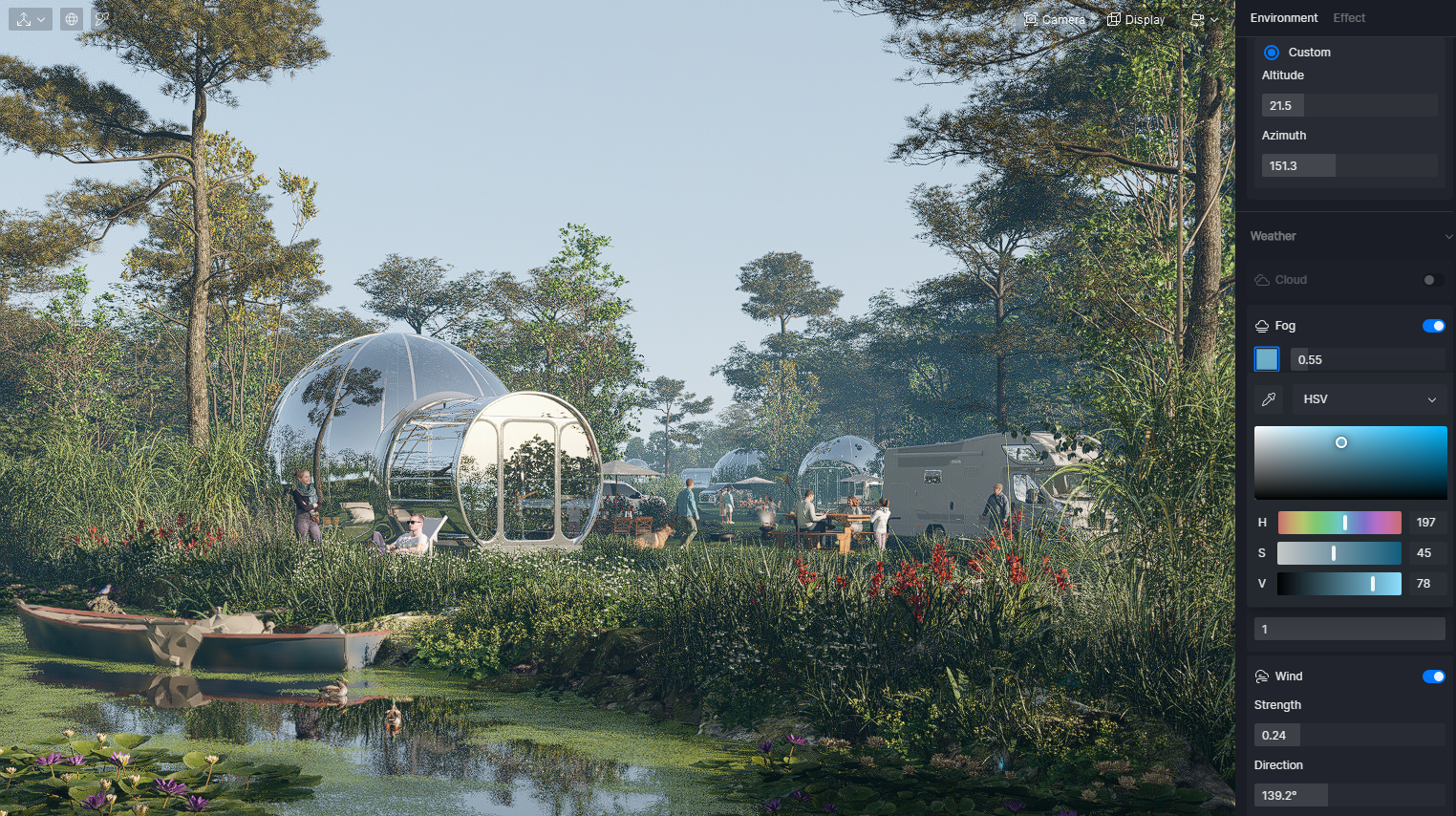 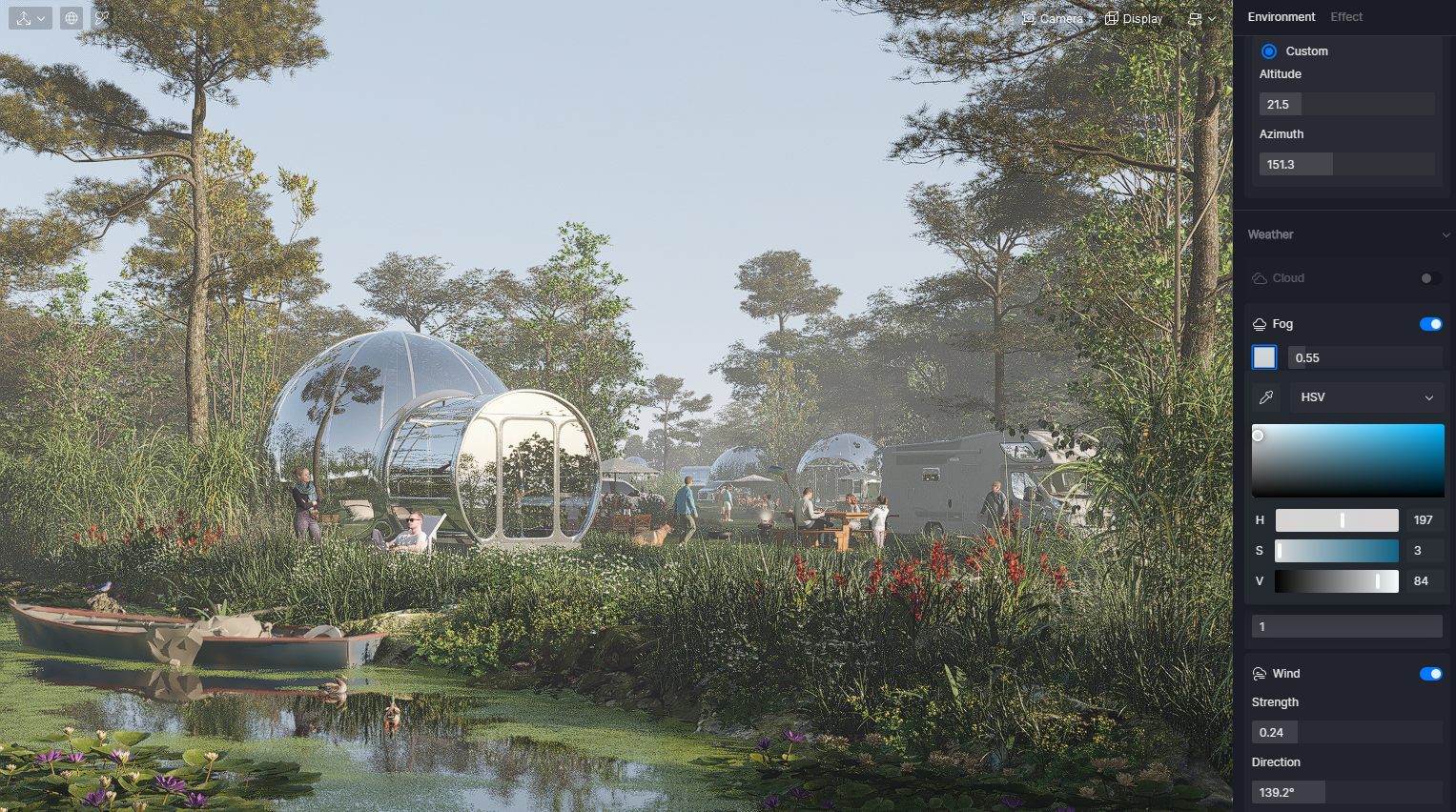 Add elements in the foreground

In this render, though the plants close by take up nearly half part of the image, you will still be attracted by the mountains far away at first. When it comes tocomposition, you can try adding something like plants close to the camera, and don't worry, the fog will still stand out and catch your attention when it blends into the background.

Adjust the start distance of fog

Think about the real world on a foggy day. The closer you are to the objects, the clearer the view will be. This situation is more obvious when the fog is very thin. In this case, it's better to make the fog start far away from the camera in render, especially when you just want to enhance the sense of depth. 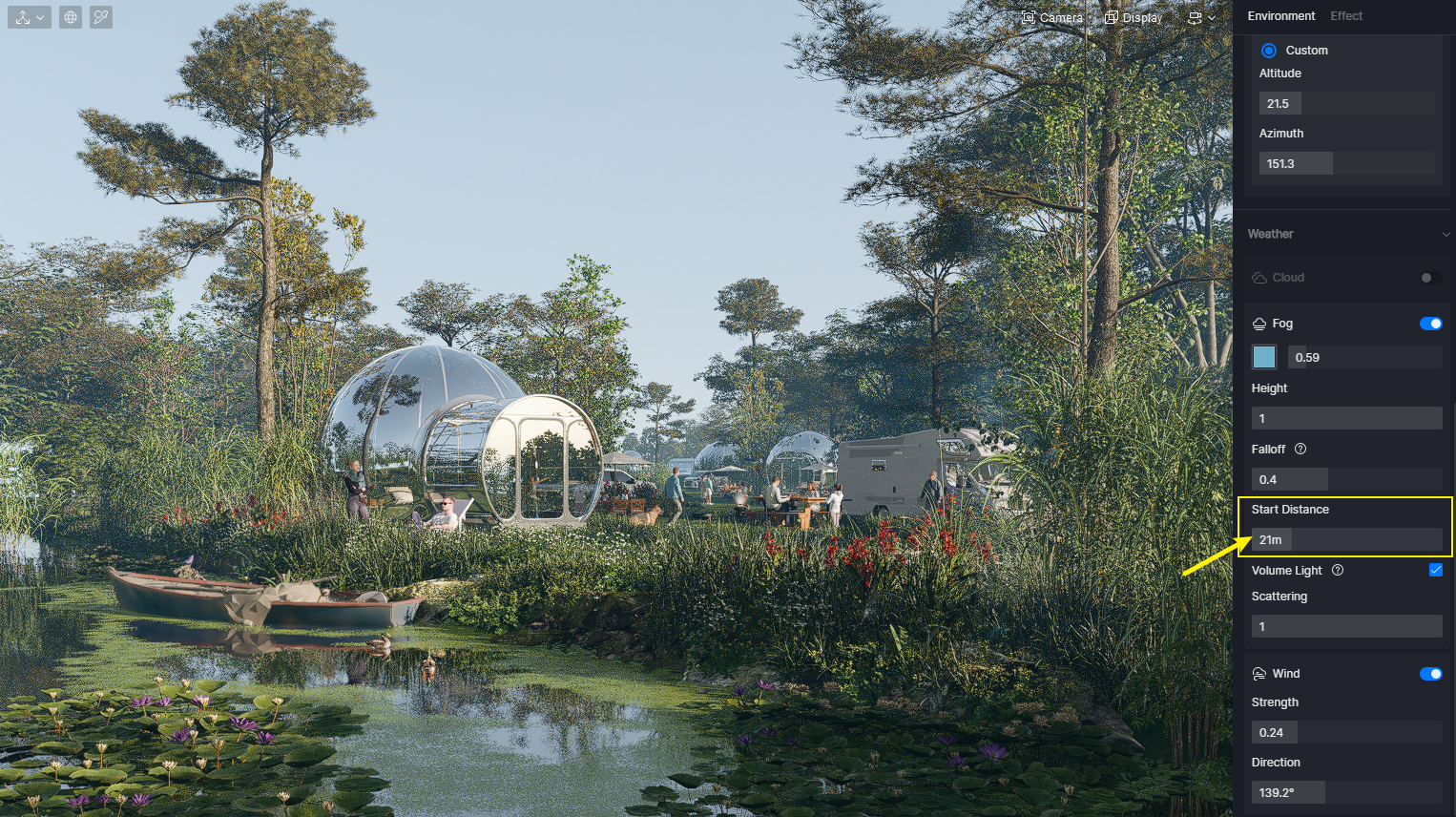 Use the combo of fog and Volume Light

What's Volume Light?
This effect is also known as "God Ray", which means the light path becomes visible when the light is scattered by particles in the air. It often happens when light passes through a crevice, such as a window or gaps between leaves.  You must be familiar with the term "Tyndall effect" widely used in photography. Now you can easily make one yourself in D5 Render.
After turning on the "Volume Light" button, the fog will appear where the light is. You can increase the "Scatter" value to make it more visible.

Add a finishing touch with clouds

Fog is a handy tool to create realisic and atmospheric visualization. So are clouds. Why not use them together to make the scene more vibrant?

Sea of Clouds by Showing Inspirations (Free Download on D5 Forum)
Both  clouds and fo effect are adjustable with several paramters, so you can make them as you like in different scenes and shots.
Fog: Color, Intensity, Height, Falloff, Start Distance, Volume Light optionCloud: Amount, Thickness, Density, Height, Speed, Direction, Cast shadow option State of Mind by Showing Inspiration A soothing evening by Rahul Renders
You can download the demo scene files: Forest by CHOpartical, Clouds by Showing Inspiration and Light Bulb House by LIYOUFU from Scene Express on D5 Forum to better explore the wonderful features of fog and clouds by yourself.
Welcome to share with us your render works using Fog or Cloud effect inside D5 Render!
Product
DownloadFeaturesWhat‘s NewSystem RequirementsBenchmarkD5 WorksGallery
Support
LearningForumHelp Center
Workflow
SketchUp3ds MaxRhinoRevitArchicadCinema 4DBlender
Follow us